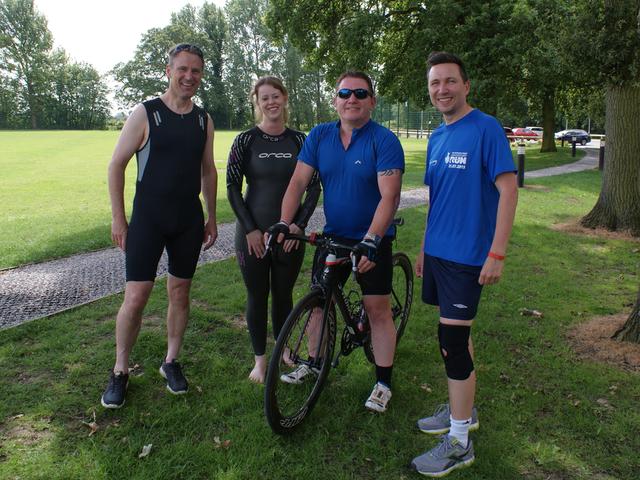 Three intrepid members of the Beverley Chamber of Trade, plus its chairman (and director or Indicoll) Julian Minshall, are set to take part in a 70.3 Ironman challenge in order to raise funds for a charity fair to take place at the town’s Christmas lights switch-on.

Claire Hastie from Tutto Italia, Andy Beet from MKM Building Supplies and Phil Scaife from De Lacy Spa will be swimming, cycling and running their way round Allerthorpe Lakeland Park on 6 September.

Andy, who did the Beverley sprint triathlon last year, discovered the event and suggested it was a good way of raising money. Claire and Phil came forward to join him, in their respective disciplines, and the idea was born.

Phil reckoned it would be a good way to get fit and Claire thought it sounded like fun, as well as being a great way of doing some fundraising for local charities, so they stepped up to the challenge.

Claire, who teaches swimming but does not have much experience of open water events, will be taking on the 1.1 mile swim. She will then pass on the baton to Andy, who is recovering from a snapped Achilles tendon. He has been cycling to recuperate from his injury, which will culminate in a 56-mile cycle ride. Once finished, Phil - who has never run further than 5km - will complete a 13.2 mile run.

They expect the whole event to take them in the region of six and a half hours.

But, it is all for a good cause. The Chamber of Trade is heavily involved with the Christmas lights switch-on and, this year, they want to put on a fair to enable local charities to promote their services.

Any money raised from sponsorship of their challenge will all be put towards the fair, thereby benefiting many local charities.

Chairman of the Chamber of Trade, Indicoll’s Julian Minshall, said: “It is absolutely fantastic that the Chamber of Trade is working together to build a better business community and putting on events that will help local charities and raise the profile of the local area.

“It is good to see local business leaders being passionate about the local area, stepping out of their comfort zones and taking on the challenge.

“We hope the local community will support us to raise the necessary funds.”

But Julian isn’t just letting the others do the work, with himself doing a sprint triathlon as a precursor to the main event. This involves a 750m open water swim - which is just short of double his previous furthest distance, in the pool, and involves wearing a wetsuit which prescribes a different swimming technique. This is followed by a 20km cycle ride and a 5km run.